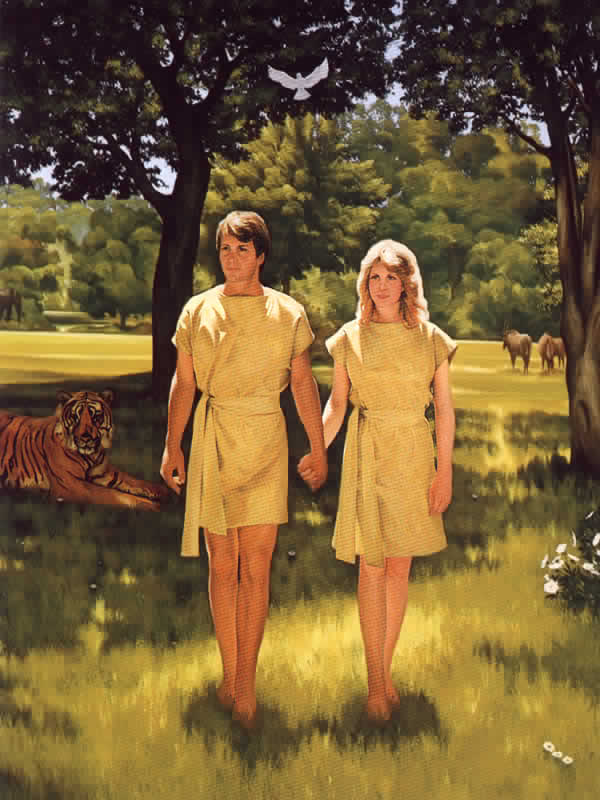 The status of women in religious discourse has historically constituted a troubling theological issue, especially in light of the traditional authoritative role of male hegemony in world religions.  Turning our focus to the Jewish and Christian world view, it is in my estimation a tragic fact of history that women have frequently been perceived as an inferior gender class by culturally dominant male theologians.  I would submit, however, that despite what some have assumed, this is not the case in the LDS revelation on theosis (becoming divine) that appears in D&C 132.

Oftentimes in religious statements, the role of Eve in consuming the fruit of the knowledge of “good and bad” is offered as an explanation for not only the inferior spiritual status of women in general, but for the attestation of sin itself in human existence.  Such a view appears, for example, in the writings of the Hellenized Jew, Philo of Alexandria, a contemporary of both Jesus and the New Testament Apostle Paul.  Concerning “woman” Philo writes:

“Woman becomes for him [Adam] the beginning of blameworthy life.  For so long as he was by himself, as accorded with such solitude, he went on growing like to the world and like God… But when woman too had been made… love [eros] enters in… and this desire [pothos] likewise engendered bodily pleasure, that pleasure which is the beginning of wrongs and violation of law, the pleasure for the sake of which men bring on themselves the life of mortality and wretchedness in lieu of that of immorality and bliss.” (Philo, Creation 151-152; also 165-166).

According to Philo’s perspective, without woman, man was free to develop and could eventually “grow” into becoming “like God. “ For Philo, if man were to obtain a type of apotheosis or divination, woman, with her ability to tempt man with physical pleasure, serves as a spiritual obstacle for men to overcome.  Unfortunately, such a view is actually quite common in early Jewish and Christian texts.

It is interesting to consider how different Philo’s view on the process of deification is from the perspective offered by the Mormon prophet Joseph Smith.  Notwithstanding its challenges for the contemporary Latter-day Saint in terms of the revelation’s historical relationship to the doctrine of plural marriage, D&C 132 states that in order for a man to become “like God,” he must in fact marry a woman.  This theological notion could not prove more at odds with the perspective held by not only Philo of Alexandria, but the conceptions traditionally espoused by many theologians in later Christian thought.

Yet notwithstanding that in D&C 132 women are afforded a much more positive status than the view often witnessed in earlier religious discourse (as typified to some extent by Philo), a feminist reader sensitive to the way women often appear in holy writ might still find some concern in the language of Joseph’s revelation.  This fact was recently apparent in an extremely worthwhile and provocative discussion on the doctrine of “theosis” in the LDS podcast series “Mormon Matters” (an outstanding series produced by my friend Dan Wotherspoon that I would highly recommend supporting).

The podcast features an amazing panel including Tom Roberts (a Greek Orthodox theologian), Charles Harrell (whose recent book exploring the development of Mormon theology through Kofford Books I would also strongly recommend), and Danielle Mooney, an extremely bright theologian and Mormon feminist.  Speaking personally, I really enjoyed the fascinating discussion led by Dan and I gained several valuable insights from each of the panelists.

At one point in the conversation, however, Danielle made the observation that in terms of early Mormon views regarding theosis (the process whereby a human becomes divine), women were perceived as a “tool” that men somehow needed to acquire for patriarchal exaltation.  Reading the revelation in D&C 132 on the process of human deification can certainly leave this impression.

The statement regarding deification in D&C 132 specifically states that in order for “a man” to be exalted, he must “marry a wife” by God’s word, which is God’s law, and “by the new and everlasting covenant” (v. 19).  A straightforward reading of the text, therefore, would seem to support Danielle’s concern.  So although this important revelation in Mormon history certainly elevates women above their traditional status (especially when compared with the view reflected in the above citation of Philo), woman is still a “tool” in a revelation focused upon men and the doctrine of human deification.

I would like to make another observation, however, regarding the revelation in D&C 132 that I believe is well worth considering; especially for those like myself, concerned with the way women are frequently depicted in religious texts.  There’s no question that the revelation is focused on “men;” unfortunately, Latter-day Saints are never going to escape the fact that despite its great spiritual value, scripture is very much a product of its time.  Hence, both the Bible, as well as scripture specific to the Latter-day Saint tradition, focuses its attention primarily upon men.  Yet I would submit that D&C 132 goes much further in terms of elevating the status of women beyond what many readers have traditionally recognized to the point that referring to the notion of woman as a “tool” in the process of man’s exaltation misses an extremely significant point.

D&C 132 draws upon a variety of traditional Old Testament motifs.  The revelation, for example, commences by discussing the matter of the wives and concubines of Old Testament heroes such as Abraham, Isaac, Jacob, Moses, David, and Solomon (v. 1).  It should come as no surprise, therefore, that in terms of its presentation on marriage, this Old Testament-like text appears directly patterned after a traditional biblical legal formulation.

Old Testament laws appear in two different literary forms that scholars refer to as either “casuistic” or “apodictic.”   The English term “apodictic” derives from the Greek word apodeiktikós meaning “proving fully.”  In terms of biblical law, “apodictic” refers to an absolute legal statement such as “Thou shalt not kill,” or “Thou shalt not commit adultery.”  The adjective “casuistic” derives from the term “casuistry,” which means simply “case-based reasoning.”  Casuistic laws in the Bible are structured according to an “if/then” literary formula, and these case laws are always written from a male perspective.  Here are several examples that involve men and women from what scholars refer to as the Covenant Collection in the Book of Exodus (Exod 20:19-23:33):

“If a man sells his daughter as a slave, then she shall not be freed as male slaves are” (Exod 21:7).

“If men fight, and one of them pushes a pregnant woman and a miscarriage results, but no other damage ensues, then the one responsible shall be fined according as the woman’s husband may exact from him, the payment to be based on reckoning.” (Exod 21:22).

“If a man schemes against another and kills him treacherously, then you shall take him from my very altar to be put to death” (Exod 21:14).

“If a man seduces a virgin for whom the bride-price has not been paid, and lies with her, then he must make her his wife by payment of a brideprice”  (Exod 21:15).

Note the pattern: the concepts concerning marriage in D&C 132 have specifically adopted this basic Old Testament formula of a male-centered casuistic law.  Turning our attention to the statement regarding celestial marriage in D&C 132, we read:

“If a man marry a wife by my word, which is my law, and by the new and everlasting covenant…”

This statement derives directly from the Old Testament “if/then” formulation and as is the case with biblical law, the formula addresses the issue of marriage according to the “new and everlasting covenant” from a man’s perspective.  Based upon the structure that this revelation formula has adopted, we should therefore expect the formula to continue in the way a biblical casuistic law would conclude with the reward for “a man” marrying a wife “by the new and everlasting covenant” to be expressed in terms of “his” consequences for performing the act.   As we saw in Exodus 21:14, if a “man” kills another man, then “HE” shall be killed, etc.

As readers familiar with this legal pattern, we should expect the text to retain its focus upon the man who married the wife.  And such an expression would no doubt leave the impression that the revelation envisions a woman/wife as a type of “tool” necessary for man’s exaltation; again, a step forward from ancient perspectives regarding women as obstacles to becoming “like God,” but still not nearly the portrayal of women that many readers sensitive to the way women frequently appear treated in religious discourse would like to see.

And yet, despite our expectations, the formulation on marriage in D&C 132 specifically breaks from the Old Testament pattern for a patriarchal casuistic law and in an extraordinary fashion, raises the level of woman beyond that of mere “tool” for a man’s exaltation.  Instead of reading “If a man marry a wife by my word, which is my law, and by the new and everlasting covenant… then HE shall receive an eternal reward,” Joseph’s revelation shatters our expectation, and in the process elevates women to an even higher status than a mere instrument.

Instead of focusing on what a man receives for “marrying a wife” by God’s word, the apodosis (or “then” portion of the clause) specifically reads:

This really is a remarkable transition.  The text clearly adopts the patriarchal legal formulation of biblical casuistic law.  Given the pattern, the fact that the apodosis specifically takes this structure and instead of stating that the man who marries the wife will be a God, consistently uses the gender inclusive pronouns “them,” “they,” and even “ye,” the switch is clearly intentional.

Thus, I would submit that this revelation does not present women as a mere “tool” necessary for a man to obtain on his way to exaltation.  D&C 132 presents exaltation and therefore “Godhood” itself as not only a state of plurality, but as a condition that is very much gender inclusive.  It is not the “man” to whom “all things will be subject.”  It is the man and the woman, together as Gods.  In so doing, this revelation exalts the religious status of women far above and beyond that of mere instruments and elevates them to a remarkable position as equal candidates for theosis.