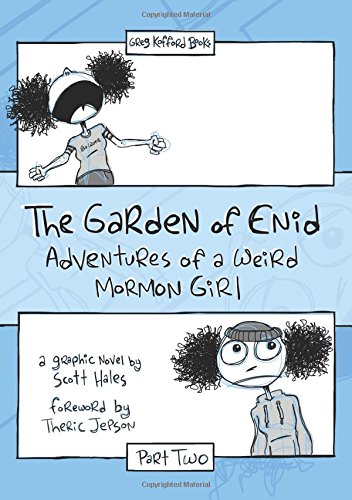 I often feel like a fraud when it comes to the world of Marvel, DC, and others. I rarely read comic books as a kid. Granted, I would skim through some at various book stores and a couple of my friends had them. For example, a good friend of mine during the elementary years introduced me to The Death of Superman and Batman: Knightfall. I think I even recall a few Aliens issues. I had a copy of Spider-Man #34 (1990) titled “Vengeance: The Conclusion.” It was the finale of a trilogy. I never read the first two installments. Still haven’t. And much like Spidey in the issue I owned, I have no idea who the Master of Vengeance was. My main source for the characters and stories of comic books was television: X-Men: The Animated Series, Spider-Man: The Animated Series, Batman: The Animated Series, and (to a lesser extent) Superman: The Animated Series and The New Batman Adventures. It wasn’t until my mission that a fellow missionary and cinephile introduced me to the wonderful world of graphic novels and comics (well, as much as he could while on a mission). It was there I learned about Batman: The Killing Joke, The Walking Dead, and others.[1] While I’m still not much of a comic reader even now (though I did hit up Civil War and Wolverine: Old Man Logan in anticipation of the movies), these friends did introduce me to a new format of artistic storytelling.

Toward the end of last year, I reviewed Scott Hale’s first volume of The Garden of Enid. I compared it to the several Calvin & Hobbes treasury volumes, consisting largely of stand-alone strips with a few longer (though mostly self-contained) story arcs. The book was funny, touching, and thoughtful. But with the release of The Garden of Enid: Adventures of a Weird Mormon Girl, Part 2 by Greg Kofford Books, Hales has taken Enid in the direction of the more familiar comics and graphic novels mentioned above.

And the results are very satisfying.

Naturally, Hales provides plenty of stand-alone strips. They range from the irritation of remembering it’s Fast Sunday the morning of (Enid vs. Breakfast), the annoyance of using “thee, thou, thy, thine” in prayers (Enid vs. The Thees and Thous), and even the “mind-blowing” connection between Jimmy Olsen in the Superman films and Scott in the LDS film The Phone Call (Enid vs. The Actor; by the way, he’s also Marty McFly’s brother in Back to the Future).[2] While the strips are still brimming with Enid’s quirky humor and Mormon self-deprecation, this second volume strikes me as more pensive than the last one. The longer strips in particular take the time to address important themes and issues in modern Mormonism, from cruel comments at church (Enid vs. The Messed-Up Day) to homosexuality (Enid vs. The Party). One of my favorites is Enid’s take on “Big Tent Mormonism.” In short, she’s “not a fan of the term” (Enid vs. The Big Tent). Her reasons?: even really big tents have walls, which kind of kills of the whole concept of openness. Yet borders are necessary because “borders help us define who we are in more ways than we probably realize.” Her solution? 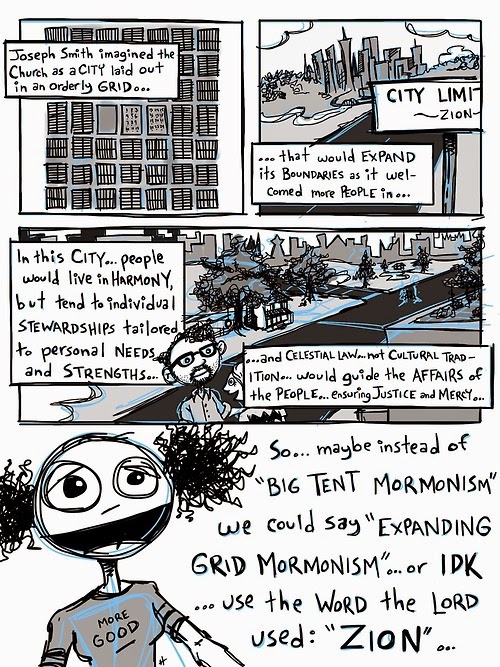 Enid vs. The Big Tent

Or consider her dream of flying through space with Eugene England in a Chevrolet as he explains ideas found in his works like “Why the Church is As True As the Gospel” and “The Weeping God of Mormonism.” Enid vs. The Struggle

But what brought all of these together was the long story arc of Enid’s relationship with her mother and the identity of her absent father. This volume offers a more fleshed-out storyline, even opening with an allusion to her EFY heartache at the end of Part One.

But more than attaching itself to the previous volume, the opening strip sets the tone and narrative for the rest of Part Two. We begin to see deeper elements of Enid’s character (including her flaws) as she establishes friendships and attempts to cope with her mom’s failing health and mysterious past. The questions she asks are harder. The situations are, for lack of a better word, messier than before: just like life. The last act (Enid vs. The Story) was not unexpected, but the realism of it (“I was just checking Twitter…”) was, in my view, theologically profound and I think far closer to what we actually experience. And the cliffhanger (along with the sheer joy of seeing Enid’s friends come through) makes me excited for Part Three.

As I continued to read, Enid’s “weirdness” actually became less weird and instead strangely familiar. Not because I’m some kind of iconoclast per se or that my personality is similar to Enid’s. But because reading Enid’s story helps me realize that pretty much everyone feels and is “weird” in one way or another. Everyone feels somewhat out-of-place in their communities. Everyone has something in their life that makes them feel less than ideal. Everyone is searching for identity, for home. The relatability of Enid is what makes the comic so endearing. And in this new volume, readers and Enid can embrace their weirdness together, making the ending lines all the more potent: “So off we went into the night…weird Mormon kids looking for answers.”