Twenty years ago this week, Elder Boyd K. Packer gave a talk[1] to the All-Church Coordinating Counsel[2] opening with some advice he received about which direction church administrators should face.

“Either you represent the teachers and students and champion their causes or you represent the Brethren who appointed you. You need to decide now which way you face.” Then he added, “some of your predecessors faced the wrong way.”

Elder Packer said this advice was difficult to follow at first, but “in time, I did understand, and my resolve to face the right way became irreversible.”

He gave several anecdotes about blessings of unquestioning obedience to file leaders saying he knew “how easy it is to get turned around.”  He warned of three dangers influencing church members to “face the wrong way” which “have made major invasion[s]” into the church because of “social and political unrest.” Members of the church were succumbing to these “temptations” because they seem “so reasonable and right.”

“The dangers I speak of come from the gay-lesbian movement, the feminist movement (both of which are relatively new), and the ever-present challenge from the so-called scholars or intellectuals.”

To illustrate his points, Elder Packer quoted from three letters, each representing one of the three dangers and provided specific responses to each.  This post will focus on the issue of homosexuality.

Elder Kimball believed “such a disease [was] curable” suggesting gay men marry women to overcome their homosexual desires. The church soon published a pamphlet stating the same, that men might be cured if they “father children” in a traditional marriage. This approach to try to cure homosexuality would continue until 1987 when First Counselor Gordon B. Hinckley said “marriage should not be viewed as a therapeutic step to solve problems such as homosexual inclinations or practices.”[4]

In the mid to late 70s the church stepped away from labeling people as “homosexuals” concerned that such labels would make “the matter seem beyond solving.” On this topic, Elder Packer stated in a 1978 pamphlet on homosexuality, “to introduce it I must use a word. I will use it one time only. Please notice that I use it as an adjective, not as a noun; I reject it as a noun.” Today, the church still prefers to say someone has “same sex attraction” rather than is a “homosexual.”

In 1962 Elders Kimball and Peterson instructed BYU not to allow homosexuals to attend the university. Various efforts were used to expel gay men from campus including interrogating fine arts and drama students, license plate monitoring, spying, coordination with local law enforcement, and polygraph tests. For a period of time, BYU used electro-shock therapy to cure homosexuality.[5]

The church became politically and financially involved in opposing the Equal Rights Amendment in 1976 saying, among things that the ERA would result in “an increase in the practice of homosexual and lesbian activities.”[6]

In 1988 the church contracted with the Hawaii marketing agency Hill and Knowlton to monitor legislative action and promote church views regarding homosexuality with the Hawaii state legislature and the U.S. Congress. In 1990 three same-sex couples applied for marriage licenses in Hawaii, raising concerns with the church and setting the stage for the church’s future efforts to protect monogamous marriage in the U.S.[7] Related legal activities continued in Hawaii, and on May 19, 1993, the day after Elder Packer gave his talk, the Hawaii Supreme Court ruled that refusing marriage licenses was unconstitutional in Hawaii.

Efforts to legalize gay marriage in the U.S. began in 1990

In his talk Elder Packer quoted from the letter he recently received from an eighteen-year-old gay Mormon, allowing Elder Packer to illustrate the “Gay/Lesbian challenge” to the church. The young man said he had experienced “what it’s like to be a homosexual in a Church which is sometimes less than accepting of its gay members.” He described supportive Bishops and Stake Presidents who have helped him spiritually, but inferred he had other difficult experiences in the church. He offered to meet with Elder Packer to “discuss the issues facing gay Latter-day Saints and the Church” in a mutually respectfully way. [8]

To the audience, Elder Packer responded to the letter:

“That young man with gender disorientation needs to know that gender was not assigned at mortal birth, that we were sons and daughters of God in the premortal state.”

He noted he had received hundreds of letters “from members who are hurting or leaders who are worried,“ but cautioned his audience that the rank and file would feel “discontented” if “we concentrate on solving the problems of the exceptions.”

“Those who are hurting think they are not understood. They are looking for a champion, an advocate, someone with office and influence from whom they can receive comfort. They ask us to speak about their troubles in general conference, to put something in the curriculum, or to provide a special program to support them in their problems or with their activism.”

He warned the audience “when members are hurting, it is so easy to convince ourselves that we are justified, even duty bound, to use the influence of our appointment or our calling to somehow represent them.” He notes that such sympathizing could tempt us to “soften the commandments to comfort them” and warns of reverse-revelation. “[I]n our efforts to comfort them, we lose our bearings”, leaving our assigned areas unprotected by facing the wrong way.

Elder Packer indicated those who are hurting should be helped and comforted and used a quote by Joseph Smith about how to provide that comfort:

The question is not whether they need help and comfort. That goes without saying. The question is “How?” The Prophet Joseph Smith, when he organized the Relief Society said, “There is the need for decisions of character aside from sympathy.”

He warned that “If we are not very careful, we will think we are giving comfort to those few who are justified and actually we will be giving license to the many who are not.”[9]

The next day, Hawaii’s Supreme Court ruled that the state’s refusal to issue marriage licenses constituted sex discrimination. The church began a series of anonymous efforts to combat gay marriage in Hawaii, Alaska, California (Prop-22 and Prop-8) and in other states.[10] The Proclamation on the Family was penned as efforts to legalize gay marriage gained momentum and the church became more involved. The Proclamation would later became a rallying call for leaders to mobilize members of the church to get spiritually, politically and financially involved protecting the family by combating gay marriage. By 2009, Utah ranked last in the nation favoring  gay rights legislation, many seeing these rights as an effort to destroy the family.[11] 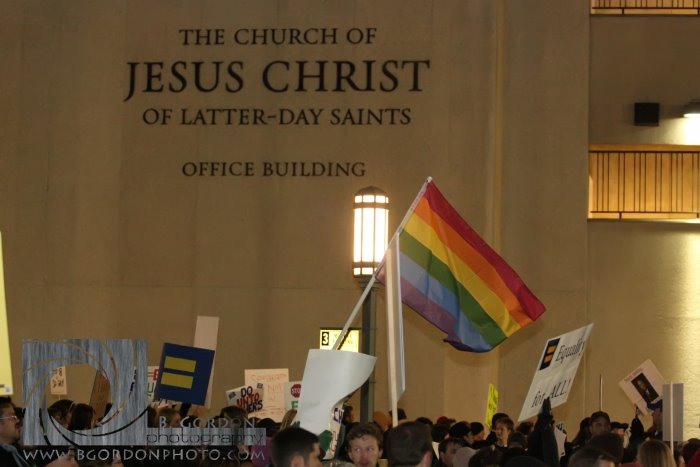 When the extent of Prop-8 efforts by the church came to light, it became a divisive issue both in and out of the church. Protests at temples became common. Gay Mormons who remained in the church felt divided, as did many straight Mormons who sympathized with gays in general, or gay loved ones. Elder Packer’s 2010 speech stating homosexuals could overcome their orientation sparked thousands of protesters to march on temple square.[12]

However, some things changed.

Grass-roots efforts by Mormons arose along a number of fronts. Popular church playwright and author Carol Lynn Pearson’s Good Bye, I Love You personalized the issue of homosexuality for many Mormons when she wrote about her life with her gay husband who died of AIDS while under her care.[13] Groups formed to provide fellowship for gay Mormons such as Affirmation.  Groups like Family Fellowship began providing support for LDS families with gay children. Groups like Mormons Building Bridges formed to send messages that Mormons were gay-friendly. Some local wards and stakes held outreach meetings for gays in their boundaries. BYU students participated in the “It Gets Better” video campaign. BYU students formed an Understanding Same-Gender Attraction group. 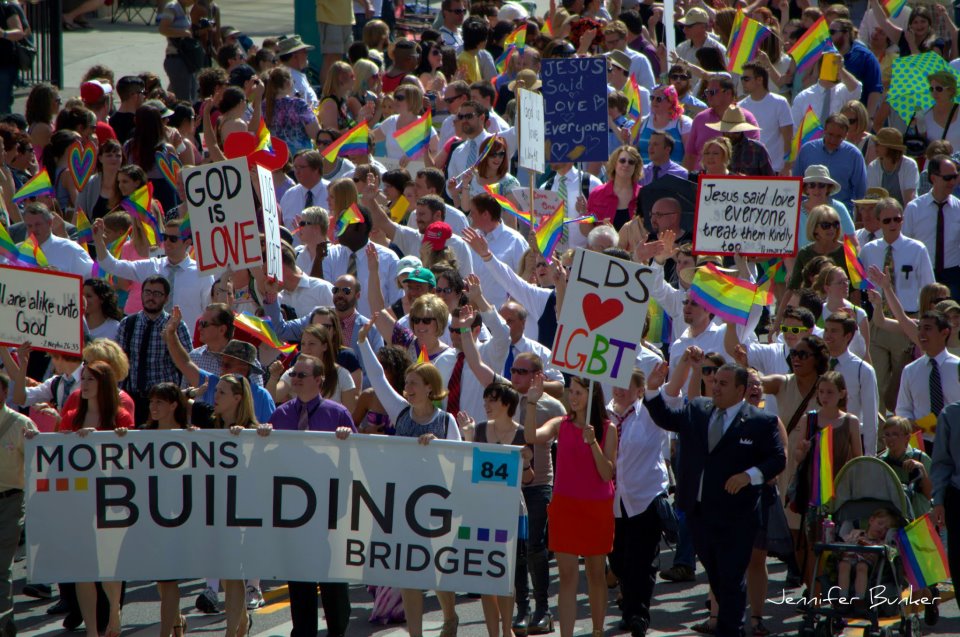 Changes also occurred in the church. Of homosexuality, Elder Oaks noted “Some kinds of feelings seem to be inborn.” The church’s printed version of Elder Packer’s 2010 talk excluded his statement that God would not let individuals be born gay. The church cautioned “not to blame family members for choices made by a person with homosexual problems.” Suggestions that masturbation causes homosexuality are no longer taught. Statements that homosexual thoughts are sinful have been removed from the Handbook of Instructions. The church has distanced itself from groups promoting reparative therapy. A General Authority offered an apology to gays and lesbians from an LDS background at a stake sponsored activity. The first openly gay Bishopric member was called. The church said it was open to accepting gays into the Boy Scouts program. BYU lifted a ban on the advocacy of homosexuality. The church promoted non-discrimination legislation in Salt Lake City. A statement by the church said it does not object to many of the rights associated with civil partnerships. President Hinckley, Elders Holland and Uchtdorf have emphasized God’s love for homosexuals.[14]

A new church website, “Mormons and Gays” includes media emphasizing compassion and understanding towards homosexuals. Church leaders state same-sex attraction is “not an illness or a disease,” that “no one chooses to have such attractions” and that “no one fully knows the root cause of same-sex attraction.” An apostle hopes the site will help the “family remain intact,” that the feelings of gays “are real,” and that no other church “should be more loving and compassionate” towards gays. Homosexuals “are real, that they are authentic, that we don’t deny that someone feels a certain way.”[15]

The church’s view on traditional marriage remains firm as it continues efforts to prevent gay marriage.[16] But in other aspects it appears to be shifting from a strict conservative stance to one of more moderation. Social change in Western civilization is quickly shedding attitudes of the past in favor of a more gay-friendly, tolerant society. Despite its fight against same-sex marriage, the LDS church is also in a process of change. The backlash against its Prop-8 campaign was severe and may have caused the church to take conciliatory measures to rectify perceptions of homophobia. Whatever the reason, the church appears to be in the process of abandoning much of its hard-line approach towards homosexuality.

Also at play seems to be more of a willingness by church leaders to listen and to, and try to make room for those once considered a danger to the church. Rather than just face upward to higher leaders or doctrinal principals, leaders are now encouraging Latter-day Saints to face both directions.

[1] Elder Boyd K. Packer, “Talk to the All-Church Coordinating Council.” Text available at http://www.zionsbest.com/face.html.  Lynn G. Robbins of the presidency of the 70 reported that Elder Packer asked him “which way do you face” when on his first assignment as a 70 (1997). Apparently this was still on Packer’s mind, and made a strong impact on Robbins. Packer told him “a 70 does not represent the people to the prophet, he represents the prophet to the people.” Robbins went on to warn against such things as accommodating local customs, and leniency in granting temple recommends, church school admittance and missionary applications. (General Conference broadcast, Saturday Morning session, Lynn G. Robbins, 10/4/2014).

[2] The All-Church Church Coordinating Council is over the teaching organizations of the Church, assisting with the correlation effort. For its genesis, see Prince, Gregory A., and Wm Robert Wright. David O. McKay and the rise of modern Mormonism. Salt Lake City, UT: University of Utah P, 2005, 149-50.

[8] The young man was Tony Collette who has written about this experience in Anderson, Lavina Fielding, and Janice Merrill Allred. Case Reports of the Mormon Alliance. Volume 3, 1997. Salt Lake City, Utah: Mormon Alliance, 1997, chapter 9, also available at http://fromonegaymormon.blogspot.com/. The full text of his letter to Elder Packer and Elder Packer’s response is available here.

[9] Note that the above several paragraphs are also about feminism and intellectualism, not just homosexuality.